Getting Out of the Middle 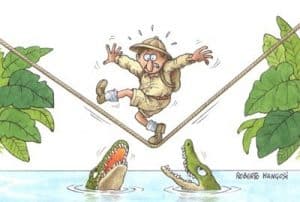 Little good ever comes from being in the middle. It’s an awkward place to be. Yet many of us seem to spend an awful lot of time there. Some of us are even paid to be there. This should resonate if you’ve ever had a customer and a boss. Being in the middle often looks like this: you want to fix something or respond to a need (often for a client or customer), but you can’t because someone or something is stopping you. You’re stuck. Sometimes it’s a rule you can’t break. Sometimes it’s a boss you can’t reach, a customer who won’t respond, a boss who won’t approve what you need, or another department with a different agenda. Often in the moment of deep ‘middleness’, you face a sinking feeling that no one is happy with you and there’s little you can do about it. Some days it feels like you just can’t do enough or please everyone. The middle is a powerless place, a non-productive limbo where nothing happens. You need to get out – and fast – if you ever want to accomplish anything. To find a way out, let’s talk about how one get’s there in the first place. Then, we’ll start the speed climb out.

How Do You Get to the Middle?

This is the sixty-four thousand dollar question. If you knew how you got there, you wouldn’t be there. Right? Not so fast. Often we get into the middle because someone thinks we have more authority than we do. In our haste to be helpful, sometimes we sign up for things we can’t quite deliver. There’s a lesson in there. Sometimes, we didn’t invite the misconception, but still it exists….or maybe someone thinks you should have authority you don’t. Matrix organizations are famous for this. There’s also a bit of ego around this position – it’s hard to admit what we can’t do. Another route to the middle has to do with trying to be all things to all people. Ever get caught as a confidant to two people on opposite sides of a conflict? You just can’t win.

Climbing Out of the Middle

Figuring out how you got to the middle will help you learn how to land there a lot less often, but once you’re there, there is one thing to focus on: getting out fast – so you can focus on accomplishing something. The first step to climbing out is to call it out. Like it or not, you’ve got to tell the parties you’re caught between that you are in the middle. This step is critical, because often, one side or the other can’t see over you to realize that you are, in fact, in the middle. Often, both parties believe the buck stops with you, when if it really did, all you’d have to do is take up your authority and walk out.

Once you’ve called it out, you’ve got a choice to make. You either need to take the lead or give the lead. Otherwise, you remain stuck. Making this decision has a lot to do with how much authority you can get away with claiming. If you can get the party blocking you to acknowledge that you are in the middle and will need some authority to resolve the issue at hand, you can effectively take the lead. If you know that you are not likely to convince the blocking party to hand over the lead, then the only choice you have is to give it to them. Often, putting both parties in contact with one another is an ideal way to give up the lead.

A prime example of this was a client who was located in region far from the corporate office. He reported into a corporate function and was responsible for implementing corporate solutions in the region. His challenge was that the region viewed him as ‘their’ resource and continued to make requests of him that were not part of the corporate agenda. He sincerely wanted to help the region and his boss at corporate didn’t want him spending time on that. The situation was further complicated by the fact that to implement the corporate solutions effectively, he had to have great relationships with the folks in his region. To get out of the middle, there were occasions where my client had to connect some of the leaders in his region with his boss. There were other occasions when he was able to take up his authority when it did not interfere with his boss’s agenda. This client’s daily decisions to ‘take the lead’ or ‘give the lead’ determine his effectiveness. If you are in the middle, those decisions will be critical to your success as well.