The Bully in the Boardroom 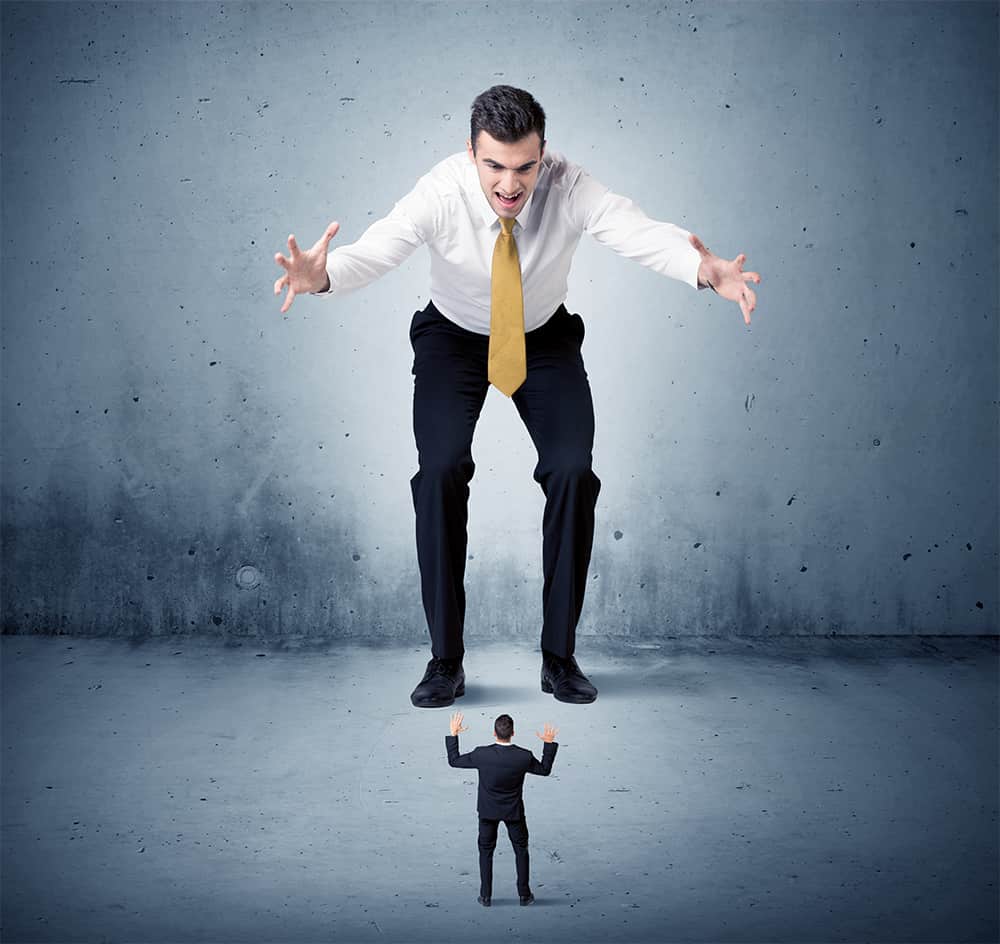 Is There a Bully in Your Boardroom?

If you’ve been in corporate America very long, you have probably met a bully in the boardroom.  They exist at every level and it is surprising how many actually get to the boardroom. Often it’s narcissists who believe it’s their duty to rule the world. For example, the junior player who’s gunning for your job or the executive willing to eat their young to be promoted. I’ve dealt with way more than my share, and their antics and behaviors never cease to amaze me.

Several years ago, a colleague and I approached several publishers about writing a book on corporate bullying. The book, we were told, wouldn’t sell, because companies don’t want to admit they have an issue, and victims would be too embarrassed to purchase the book. It’s a very scary situation for an all too frequent problem that destroys quality of life in corporate America every day.  If we don’t start talking about it, the bully in the boardroom will keep winning.

5 Strategies to Win Against the Boardroom Bully

If you have a bully in your boardroom, conference room, nest of cubicles or corner office, here are some strategies to help you win when it counts:

1. Stand up to the bully

No one dared cross one guy I worked for – he was downright mean. He yelled, screamed, and loved to humiliate people. I was so emotionally drained by the time I confronted him, I really didn’t care if he fired me.

It happened one day when he was screaming and trying to intimidate me. Since he was an SVP, and I was new to my career with little authority, he was doing a good job, and I had had enough. After politely listening to his rant, I placed a confused look on my face and innocently said, ‘Excuse me; are you yelling at me?’ He looked confused and yelled, ‘NO, I’M NOT YELLING.’ I replied, ‘OK, I wanted to be sure, because I don’t allow people to yell at me, and I need to understand if that was your intent.’ Looking a bit shocked, he calmly said, ‘No, I didn’t mean to yell.’ This intervention not only changed the tone of our conversation, but lead to a shift in the dynamic of our work relationship and interactions.

We recommend to stand up to bullies early and often. Do not wait until your emotions and your health suffer. Both will eventually compromise your ability to win. Research shows that that bullies rarely target people who they know will stand up to them. Do it quickly.

Bullies are often quite predictable.  Once you believe you’re a target, build a strategy for the next incident. For example, if your bully’s tactic is yelling or calling you out in public, have some phrases ready to diffuse the situation and react intentionally.  If you suspect someone is after your job, find an ally at a level above you whom you can trust. Preparing yourself for a bully’s attack helps remove the shock and emotional reaction of being taken off guard. Plan a reaction that enables you to stay true to who you are instead of sinking to their level, especially if others are watching.

I had a female boss who would frequently walk down a row of cubicles humiliating people. It was a matter of time before she got to me. Since I was prepared, I knew a public outburst would not help matters. I also knew that her tirades were fed by the victim’s reaction and usually only ended in her looking like a fool. The day she started in on me, I stayed silent and nodded until she stopped yelling. Since she didn’t get a reaction, I wasn’t a favorite target after that. Several people came to sympathize later, which gave me the chance to point out that she was the one who looked bad, not me.

Sometimes being bullied can bring coworkers together. Once, when I started at a new company, my co-workers actually took me to lunch to explain how a particular bully operated. In this case, they explained that our boss would complain to one team member about another, pitting team members against each other. My new peers asked me to join a pact. We agreed that when one of us was brought up, we would tell them. This allowed all of us to support each other and head off her attacks at the pass. It also created solidarity because none of us were in it alone. Banding together requires some caution because it may present as gossip.  You need to implicitly trust the people you’re talking to and create strategies that relieve stress, support each other, and minimize the effect of the bully.

According to the Workplace Bullying Institute, once you are the target of a bully, you are 77% more likely to lose your job. With these odds, the risk of attempting to expose the bully outweigh the value of doing nothing.  This is especially true when you can link exposing the bully to business value. Put emotions aside and focus on building a business case for what the bully is costing the company.

Use numbers (customer service, engagement, morale, rework, etc.). Think in terms of dollars and build a case that cannot be ignored. Point out the implications to corporate values but leave out what it is doing to your health (if they don’t care about the health of the business, they’re not likely to care about yours). Then find the MOST senior person you can get to and discuss it. Don’t tell my colleagues I said this, but this is not the time to go to HR. In most cases, if HR had the authority to fix it, the bully wouldn’t be there. Do NOT go to the bully’s boss. Go to the most senior person you can, because they are most likely to care about the cost.

Here’s the secret: you only get ONE shot at this. You’re giving the company a chance to fix the problem, but you will be left with the result (remember the 77%). This is risky business, so plan your exit strategy before you do it, and GIVE IT ALL YOU’VE GOT. If the company does not fix the problem, your status can suffer and the situation could get worse.  But since you’ve developed an exit strategy, you will have all the data you need. Implement your plan and leave on your terms. If you don’t have the company’s support, get out. Your health and happiness depends on it!

5. Know When to Walk Away

There is a point in most of these situations when you will know you either can’t win or have gone sideways trying. Recognize this is likely not your fault since bullies win most of the time. While this is a horrible truth, it is important to call it what it is. Beating a bully is not about winning, it’s about survival. If you have a competitive nature, recognize that being political and trying to win at the bully’s game may backfire. It may cost you your reputation and cause all manner of stress-related illnesses. No matter how hopeless or insecure you are about leaving and/or finding other employment, keep in mind, there is life outside of wherever you are and jobs for good people. Just be sure to leave on your own terms rather than quitting in haste or waiting to be let go.

The year before I started my business, I took six months to plan my exit strategy. In March, I realized I wasn’t going to win or even come close to being successful in a situation where I had became the target of someone who worked for me. It was humiliating to not have my boss’s support. During a week off, I wrote the business plan for LeaderShift Insights (which had been a dream of mine), and then went back to work. I did my job well and with less pressure knowing I secretly had a resignation letter in my pocket for when I needed it. My hope was to stay long enough to get my bonus that October and by late September, I had enough negotiating power to pull that off. I have never looked back.

If you are the victim of a boardroom bully, give us a call. This stuff is real, and we can help.